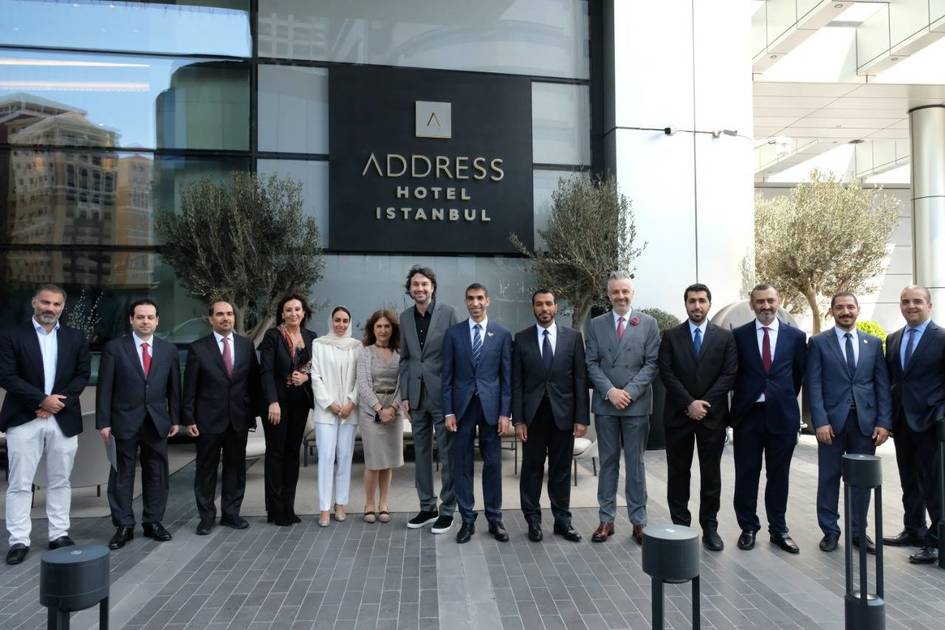 Istanbul: “The Gulf”
Thani bin Ahmed Al Zeyoudi, Minister of State for Foreign Trade, confirmed that Emirati-Turkish relations are preparing for a new era of partnership and constructive cooperation based on the achievement of common interests and the stimulation of mutual economic growth in the two friendly countries .
He said that the Emirati-Turkish relations were currently seeing a qualitative development in all areas of common interest, thanks to the joint will of the leaders of the two countries to promote these relations to wider horizons, which was translated by the visit of His His Highness Sheikh Mohamed bin Zayed Al Nahyan, Crown Prince of Abu Dhabi and Deputy Commander-in-Chief of the Armed Forces. , to Turkey by the end of 2021, and the visit of Turkish President Recep Erdogan to the UAE last February, which led to the signing of approximately 72 agreements and memoranda of understanding in various fields. Thani Al Zeyoudi’s statements came at the end of his visit to the head of a high-level Emirati delegation to Turkey, which witnessed the launch of the first round of talks aimed at reaching a comprehensive economic partnership agreement between the two to reach countries aimed at increasing the volume of intra-non-oil trade between them, stimulating mutual investment, and consolidating economic development relations and upgrading them to wider horizons by creating more opportunities for the business communities in the two countries. During this visit, His Excellency held a series of meetings with a group of Turkish ministers and senior officials, as well as representatives of the Turkish business community and private sector.
Thani Al-Zeyoudi met with Mehmet Muş, Turkish Minister of Trade, Mustafa Varank, Minister of Industry and Technology, Fatih Donmez, Minister of Energy and Natural Resources, and Adil Karaismailoğlu, Minister of Transport and Infrastructure.

In Thani Al-Zeyoudi’s meeting with the Turkish Minister of Industry, the two parties praised the positive developments in bilateral relations over the past two years, reaffirming the common interest in supporting these constructive developments and striving to promote these relations. develop and new horizons for areas of collaboration.
The two ministers also discussed ways to develop joint work to benefit from industrial projects in the two countries, and discussed opportunities for cooperation in industrial and technical projects on a bilateral basis, in a way that benefits the economies of the two countries favor.
Thani Al-Zeyoudi and Mustafa Varank discussed mechanisms for exchanging experiences and the transfer of knowledge between the two sides, and ways to support the growth and development of start-up companies in the two countries.
They also touched on ways to improve joint work to take advantage of modern technologies and digitalisation applications, and they discussed training and rehabilitation programs for young people supporting their entry into the labor market in the industrial and technology sectors.The two ministers held investment opportunities discuss what is available. in the two countries and in other countries, with a focus on sectors of common interest.

At the roundtable meeting, which brought together Thani Al-Zeyoudi and his accompanying delegation with the Turkish Minister of Trade, Mehmet Muş, senior officials and representatives of the business and private sector in Turkey, the two parties discussed in the presence of officials from ‘ a number of key Turkish companies, opportunities for co-operation between the private sector in the two countries, and ways of ways were also discussed. the two could hamper Some potential investment opportunities in the two countries were also offered.
Al Zeyoudi also highlighted the latest developments and incentives in the business environment in the UAE on the Turkish side, and the positive impact of plans to stimulate economic, industrial and investment growth on the ease of doing business in the country in all sectors.
Thani Al-Zeyoudi and the Turkish Minister of Energy and Natural Resources discussed ways to promote joint work to wider horizons, and the various opportunities to improve cooperation between the two countries. Wind and solar energy. The two ministers also agreed on a mechanism to remove any obstacles that could hinder the development and prosperity of bilateral relations between the two countries. They also discussed opportunities for joint cooperation between the UAE and Turkey in other countries. An invitation was also extended to Fateh Donmez to attend the International Utilities Conference, which will be hosted by Abu Dhabi from 9 to 11 May.

In the meeting between Thani Al Zeyoudi and Adel Karaismailoglu, Minister of Transport and Infrastructure of Turkey, the two parties emphasized the importance of joint work and the development of bilateral relations and the expected benefits of the comprehensive economic partnership agreement between the two countries, and they discussed ways to support joint investment in infrastructure and transportation to serve trade exchange, and it was agreed.To develop airlines between the two countries in the coming period. An invitation was also extended to the Turkish Minister to attend the Middle East Railway Conference to be held on 17-18 May in Abu Dhabi.
Thani Al-Zeyoudi also held a round table meeting with the Turkish Industry and Business Association during which they reviewed opportunities for cooperation and joint investment. He briefed the members of the association on the latest developments in the business environment in the country and ways discuss to address obstacles to the further development and prosperity of trade, investment and economic relations between the two countries.

In a related context, Thani Al-Zeyoudi and his accompanying delegation made field trips to Istanbul and Ankara to inspect a number of investment projects affiliated with Emirati companies. Last year he also visited the real estate projects of Emaar and Rotana.
Thani Al-Zeyoudi, accompanied by Turkish Minister of Industry and Technology Mustafa Varank, visited a number of companies in the Information Technology Valley, including the “start-up Roof Stacks” company specializing in augmented reality services, game development and financing technology , and the “Ortem Electronic” company specialized in the development of high technologies and series production. In this area, in addition to the user experience center of the Turkish car manufacturing company «TOGG». His Excellency also visited the Technology Park in Istanbul “Technopark” and was informed about the activities of the industrial and technology companies operating in it.
It is noteworthy that the State delegation that participated in this visit, Saeed Al Dhaheri, UAE Ambassador to Turkey, Juma Al Kait, Assistant Deputy Secretary for International Trade at the Ministry of Economy, Abdullah Al Shamsi, Assistant Deputy Secretary for the Industrial Development Sector. . the Ministry of Industry and Advanced Technology, and Sameh Abdullah Al Qubaisi, Director-General of Economic Affairs. Abu Dhabi Department of Economic Development, Fahad Al Gergawi, Executive Director of the Dubai Investment Development Corporation, Sherif Habib Al-Awadi, Director-General of the Fujairah Free Zone Authority, and Mohammed Juma Al Musharrakh, Executive Director of the Sharjah Foreign Direct Investment Office (Invest in Sharjah), and a number of government officials and businessmen in the state.