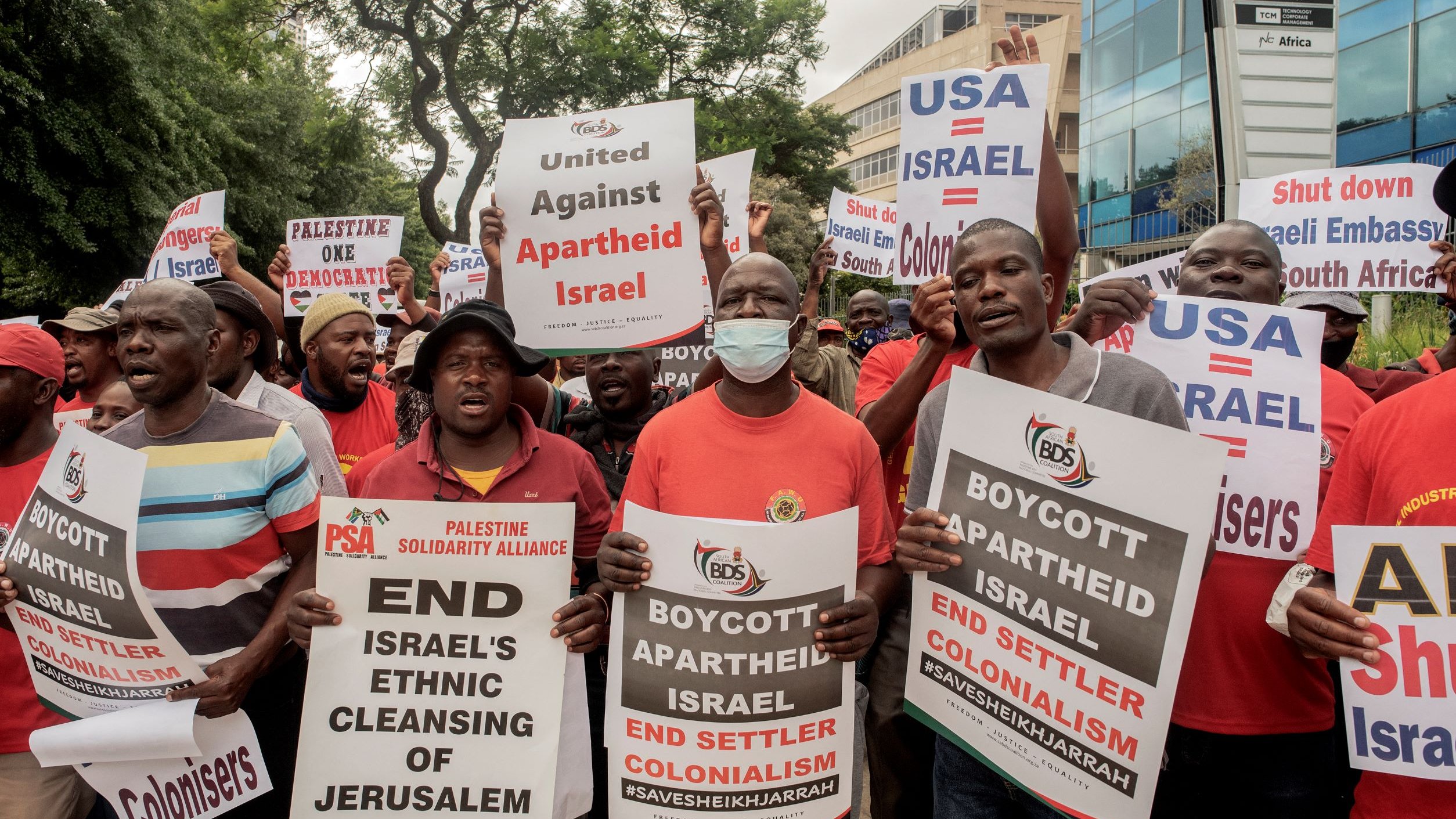 Last month, I spoke at the first conference of the African Network of Solidarity with Palestine in Dakar, Senegal. Militants from 21 African countries rallied to build a continental movement to support the Palestinian liberation struggle against Israeli apartheid. I had the honor of being with so many brave young Africans who reaffirmed our continent’s historic position on Palestine and the firm relationship with the Palestinians: two peoples engaged in a common struggle against occupation, colonialism and apartheid.1. I imagine my grandfather, Nelson Mandela, also felt himself among his comrades when he traveled to Dakar 60 years ago to enlist African support for South Africa’s liberation struggle.

Network delegates discussed the penetration of the apartheid state of Israel into Africa, which relies on the provision of military and surveillance technology to many oppressive governments. Through such actions, Israel weakens democracy and human rights in Africa as well as solidarity with Palestine on the continent. I endorsed this diagnosis when I spoke at the network’s public event on March 12, emphasizing how Israel planted its tentacles in Africa.

Israel is desperately looking for allies at a time when a growing number of highly respected human rights organizations call it an apartheid state, using surveillance tools and military and agricultural technology as bargaining chips and to buy legitimacy in Africa. In this context, Israel has penetrated African structures in several ways, some openly and others more secretly. It is not anti-Semitic, as some South African pro-Israel media have hysterically claimed. The South African Constitutional Court recently ruled that criticizing Israel does not mean attacking Judaism. There is a clear difference between Judaism and Zionism, and between the Jewish people and the glorifiers of Israel.

Light the flames of war

The export of weapons tested on Palestinians in the Occupied Territories after some of the deadliest regimes in Africa has been a key element of Israeli diplomacy for decades, as this country sought to reconnect with most parts of the African continent after the latter boycotted it after 1973. “October War”.

Israel armed the apartheid regime in South Africa in the 1970s and 1980s. During the 1990s, during the genocide, the Israeli government violated the international arms embargo on Rwanda and provided weapons to both the government’s Hutu forces and Paul Kagame’s rebel army. Israel has again violated the international arms embargo by supplying weapons to both pro-government militias and opposition forces in South Sudan, in the context of the civil war plaguing that country. Israeli arms companies shamelessly transferred $ 150 million worth of offensive weapons under the guise of an agricultural project for South Sudan. For years, Israel has also trained and armed the military units that protect the oppressive presidential regimes in Cameroon, Uganda, Equatorial Guinea and Togo. It therefore helps to keep dictators in power.

Israel also supplies cyber weapons, such as the NSO group’s Pegasus spyware and circles, to various African governments to suppress opponents and suppress journalists, political opponents and human rights activists. and even spying on other African leaders, including South African President Cyril Ramaphosa. This spyware software allows you to hack the encrypted communications of any Android or iPhone smartphone. In recent years, Israel has made the court for African leaders by giving them espionage technology in hopes of winning their support from the United Nations and the African Union. Helping leaders stay in power at the expense of human rights in Africa has been an effective way for the Israeli government to make friends on the continent.

Israeli companies and individuals have also interfered in election campaigns in almost every African country, undermining some of the continent’s most stable democracies. Strong Israeli interference was indeed noted ahead of the 2014 election in Botswana, where dozens of Israeli advisers linked to the Mossad launched a “war” in favor of the ruling party.

The Pegasus program was also used to spy on journalists and other political figures ahead of the Ghanaian election in 2016. The Ghanaian newspaper “The Herald” in 2020 revealed the involvement of Israeli intelligence figures who tried to influence the outcome of the national election . took place that year.

Similar allegations about the involvement of Israeli intelligence experts were made before the presidential election in Malawi in 2020. Prior to that, lists and the electoral system in Zimbabwe and Zambia were also in the hands of an Israeli company linked to the Mossad. Israeli groups have also conducted disinformation campaigns in Africa. And in 2015, before elections in Nigeria, Israeli experts hacked into the personal email of then-opposition candidate Muhammad Bukhari. The stolen information was also used during disinformation campaigns on WhatsApp and on Facebook against Bukhari.

Four years later, the Archimedes group – an Israeli consultative group that boasted on its website that it “could change the reality according to the wishes of its clients” and significantly influence presidential elections around the world – apparently supported Buhari when he won the election. in 2019. And even posts appeared on Facebook, backed by Archimedes, in which Bukhari praised and criticized his then opponent, Atiku Abu Bakr.

Facebook then closed hundreds of fake accounts on Instagram and Facebook, all managed by the Archimedes group of Israel. The company’s goal was to set up elections not only in Nigeria but also in Senegal, Togo, Angola, Niger and Tunisia. These accounts spread information related to the elections and published criticisms that targeted some politicians and pretended to be local media.

It is therefore not about private companies doing business in Africa. Israeli companies specializing in weapons and espionage technology should rather obtain export licenses from the Israeli Ministry of Defense. The Israeli government therefore has a primary mode of influence, and this makes these companies an extension of its foreign policy. A co-worker of former Israeli Prime Minister Benjamin Netanyahu said: “Since our Ministry of Defense controls the circulation of these systems, we will be able to exploit them and derive diplomatic benefits from them.”

Israel relies heavily on many private Israeli companies, businessmen, consultants and mediators who benefit from their access to the backstage of power on the continent to serve the interests of the Israeli state. The Israeli “diplomacy of mediators” is already increasing in Africa.

In the name of development and food security, Israel promises agricultural and water technology to Africa. However, it will not contribute to the fight against poverty in Africa unless it is compatible with its political interests. When Senegal introduced UN Resolution 2334 in 2016, which reaffirmed the illegality of Israeli settlements in the occupied West Bank and East Jerusalem, Israel responded by canceling all aid programs aimed at that country, despite the fact that the Israeli Ministry of Foreign Affairs promotes them on a large scale, she described it as part of Israel’s contribution to combating poverty in Africa.

Israel’s assistance to African countries, whether agricultural, military or through surveillance technology, is not charity. It requires diplomatic maintenance within the framework of the United Nations and the African Union. It seems like a transcendental bargaining chip, even a checkbook diplomacy. This is the reality of the Zionist project in Africa.

Africa was thus blinded by Israel’s promises of arms, espionage and aid, which in the past were a stronghold of Palestinian solidarity, to the extent that the apartheid state was housed in the African Union. We need to think deeply about how the parallel diplomacy of the Israeli apartheid state penetrated the African psyche. We must also block Israel’s efforts to co-opt Africa. If we do not do this, we will continue to be complicit in the bloodshed in Africa and Palestine.