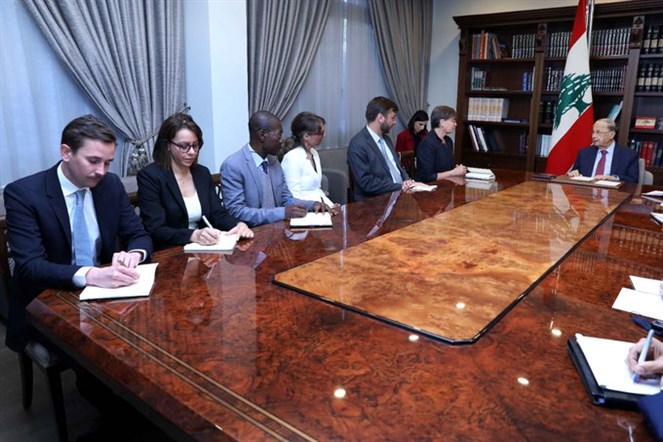 President of the Republic General Michel Aoun welcomed Lebanon for the participation of a delegation from the International French-speaking Organization in the observation of the parliamentary elections next Sunday. President Aoun called the head of the mission, Ms. Alda Greoli, who received him at the Baabda Palace this morning with the delegation members, informed that Lebanon the Secretary-General of the International French-speaking Organization, Mrs. Louise Mushikiwabo, appreciates her initiative to monitor the organization’s mission to the elections, and points out that all measures have been taken to conduct the operation elections in an atmosphere of transparency, freedom and democratic competition. The President of the Republic said that there are reports that some candidates have resorted to the use of election money, which requires the intervention of the Electoral Supervisory Body and the competent judicial authorities to prevent the continuation of this behavior which constitutes the voters’ choices can negatively affect.

In response to the head of the mission’s questions, President Aoun stated that he was supposed to establish a “mega center” in a number of Lebanese regions to facilitate the electoral process for voters, especially those living in the capital and suburbs. , but parliament suspended the mega-center, leading to fears of a decline in voter turnout next Sunday. President Aoun also indicated that women’s participation in the election was higher than it was in previous election cycles, and this is a positive issue that is hoped to develop further in the upcoming elections.

While President Aoun wished the mission success in its mission in Lebanon, he pointed out that the initiative of the Secretary-General of Francophonie reaffirms the organization’s firm belief in respect for democracy in Lebanon, and also confirms that Lebanon is a center of cultural radiation in general remains. and Francophonie in particular. This initiative also falls within the context of the tireless work to open an office for the Middle East in Beirut, which will take place shortly after the parliamentary elections.

At the beginning of the meeting, Mrs. Greoli conveyed the greetings of the Secretary-General of the International French-speaking Organization to President Aoun, and thanked him for the cooperation shown by the Lebanese state in facilitating the mission of the mission, which will remain in Lebanon for ten days before the elections. monitor and prepare a detailed report on it. Mrs. Greoli took note of the zeal shown by President Aoun to hold the parliamentary elections on time and to ensure the conditions for their success, pointing out the importance of Lebanese women’s candidacy to consolidate democracy, which should not be sold or bought but should rather be applied in full freedom and transparency.

Deputy Prime Minister
In addition, President Aoun Deputy Prime Minister Dr. His Excellency received Al-Shami, who briefed him on the results of the talks he had held in Washington over the past two weeks with officials from the International Monetary Fund, the World Bank, the US State Department and the Treasury, the European Union Commissioner and Director of the French Treasury, which dealt with the current economic reality in Middle East Lebanon. They praised the agreement reached at staff level with the Fund.
President Al-Shami has made it clear that the officials he met are awaiting the approval of the reforms agreed with Lebanon, and some draft laws referred to Parliament.