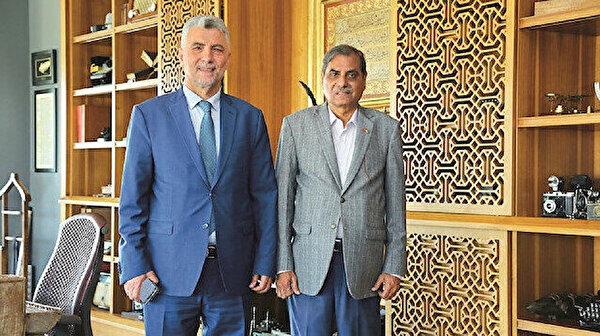 Last Thursday, the “D-8 Investment Forum” of the Group of Eight Islamic Developing Countries kicked off in Istanbul, Turkey. The forum is organized on the occasion of the 25th anniversary of the founding of the group (D-8), which includes Turkey, Bangladesh, Indonesia, Iran, Malaysia, Egypt, Nigeria and Pakistan.

Among the participants was the co-chair of the Turkish-Pakistani Chamber of Commerce and Industry Amjad Ravi, who led his country’s delegation to attend the “D-8 Investment Forum”, where he was the headquarters of the “Albayrak Holding”. “company visited. by Turkish businessman Ahmed Albayrak. Mr. Amjad Rafi, CEO of Al-Bairaq Holding Company, was introduced by Mr. Omar Polat received.

While receiving the Pakistani delegation, the newspaper Yeni Şafak interviewed Mr. Amjad Rafi spoke about the investments between the two countries in light of the arrival of Pakistani Prime Minister Shahbaz Sharif.

Mr. Rafi’s response to our question about the changes that will take place in relations between the two countries after Prime Minister Shahbaz Sharif’s visit to Turkey was by saying: “Turkey and Pakistan are close countries, and when the leader of the Muslim League and the current Prime Minister Sharif Shahbaz was previously in government, the investments of Turkish companies reached more From one billion dollars in Pakistan, and so we expect more new Turkish investments in Pakistan after Shahbaz Sharif became Prime Minister. “In fact, during his visit to Turkey two weeks ago, Prime Minister Sharif Shahbaz apologized to the Turkish companies that were subjected to bad practices in Pakistan,” Rafi added.

Pakistan has determined the volume of trade with Turkey, which aims to reach $ 5 billion. In this regard, we have for Mr. Ravi asked how long we would reach this number, to which he replied:

“The leaders of the two countries have set this goal before them, and we can consider it a very ambitious goal, but it is not easy to achieve it in the short term, but on the other hand it is not difficult to achieve. “The most important issue now is that we have to win the trust of the Turkish business world and give confidence that Turkish businessmen will reinvest. In Pakistan, if we achieve this, investment will increase.”

He added: “With regard to the volume of trade exchanges, the most important thing to do is to sign and implement the free trade agreement between the two countries.

In a related context, Ravi stated that the areas that will enjoy priority in investments between the two countries are primarily the construction sector. He said, “Many Turkish companies in the construction sector are doing their business in Pakistan because our country needs it. Millions of social housing.”

The “Ravi” that the second sector is the energy sector, pointing out that Pakistan has been exposed to ongoing power outages, which has negatively impacted industry and exports.

He added: “The Turkish company, Zorlu, to generate electricity, built two solar power plants in Pakistan and installed wind turbines in Pakistan for the first time in 2007.

And he added: “Pakistan is an efficient and important market for solar panels. Because our country has a lot of solar light, we therefore need investments in solar energy and Turkish and Pakistani companies can work together to manufacture solar panels.”

The “Ravi” that Pakistan also has a young group in the services and software sectors, noting that young people there have made rapid progress in the field of information technology.

He said: “We have billion-dollar software exports, Turkey is very close to the markets of the United States and the European Union, and Pakistani software companies are trying to gain access to rich markets through joint ventures with Turkish companies. to bring the leg. “

In the same context, Ravi spoke about the contribution of train services to bilateral trade, saying: “The sea freight between Turkey and Pakistan arrives within 40-45 days, and freight train services have recently started between Islamabad, Tehran and Istanbul, and the train departing from Islamabad .

He added: “The freight cost for rail transport is much lower than the shipping cost, so I invite the Turkish business world to export by rail to Pakistan.

We import $ 2 billion worth of textile machinery annually and we have just started buying from Turkey, there are great opportunities for Turkish companies in Pakistan in the field of food processing machinery and confectionery machinery, 40 percent of our food products are thrown away before they market because we do not have freezer trucks.

And he added, “There are great opportunities for investment in the tourism sector in our country, and our country includes many beautiful tourist areas. We live in all four seasons and have important ski resorts and we can benefit from Turkey’s experience on the field of tourism and cooperation. “

It is noteworthy that Turkey and Pakistan signed 7 agreements earlier this month in the presence of Turkish President Recep Tayyip Erdogan and his guest, Pakistani Prime Minister Shahbaz Sharif.

The signing ceremony of the agreements was held at the presidential complex in the capital, Ankara, after a bilateral meeting between Erdogan and Sharif, and another meeting at the level of delegations.

It also included two memoranda of understanding on the development of bilateral trade and economic relations, and on technical cooperation in the field of road engineering.