Ramallah – Dunya Al Watan
The Deputy Speaker of the Palestinian National Council, Musa Hadid, chaired a meeting that brought together a delegation from the NATO Parliamentary Assembly’s Science and Technology Committee and representatives of major ICT companies operating in Palestine. and communications technology sector, the energy and water sector, and what these institutions and companies have been able to achieve since their inception despite the scale of the major obstacles these two sectors have faced and continue to face as a result of the occupation policy.

Hadid began the first meeting by talking about the concerns of the Palestinian people, which include all aspects of life due to the Israeli occupation, and which are difficult to ignore when talking about sustainable development in general and in particularly those facing the information technology sector, in view of the occupation’s monopoly over the Palestinian space and its control over the resources and capabilities of our people in addition to the outlets The Ministry of Foreign Affairs is deliberately delaying the access of goods and technical equipment and confiscate them in some cases, in addition to supporting the occupation for Israeli companies to engage in unfair competition against Palestinian companies, by taking advantage of the Israeli settlements located near Palestinian gatherings and cities.

Representatives of the communications and information technology sector said that the occupation’s dominance of the frequency spectrum, control of international communications and information points, and the imposition of restrictions on the construction of networks and relay stations are one of the main obstacles facing the communications sector. , in addition to preventing the interconnection of Palestinian cities through fiber-optic networks under the pretext that they are through areas that are under Israeli security control.

The participants briefed the delegation on the key obstacles facing the telecommunications sector, which are represented in preventing the Israeli occupation of the Palestinians from the fourth and fifth generations of telecommunications, which has a negative impact on all aspects of life, especially health and education, in light of the Corona pandemic, and deprives many students of enjoying e-learning services in remote towns.

In the second meeting, representatives of the energy and water sector, representing the Energy Authority, the Water Authority, the Electricity Regulatory Board and the main distribution companies, praised the achievements in this sector by expanding water and sewerage networks around most areas and the necessary maintenance work for these networks, and the expansion of electricity networks in various regions and the increase of their capacity Absorption and the gradual shift to the provision of alternative energy sources, especially solar and wind energy, in its relentless pursuit of preserving the environment.

Representatives of the water sector said the Palestinian citizen suffers from a severe shortage of water, which is considered a right and a basic condition of life at a time when Israel is stealing Palestinian water and moving to the interior and settlement areas. pump. studies, the Palestinian citizen’s share of water is 1 to 9 compared to settlers. Israel also prevents the drilling of artesian wells in the Palestinian territories due to its dominance over water resources, and ignores the Palestinians’ increasing need for water, whether for drinking or agricultural purposes.

Representatives of the energy sector said that Palestine is mainly dependent on the electricity produced by the occupation, while striving to gradually shift to obtaining alternative sources, including Jordan and Egypt, to meet the growing needs for electricity, whether for domestic or industrial use. 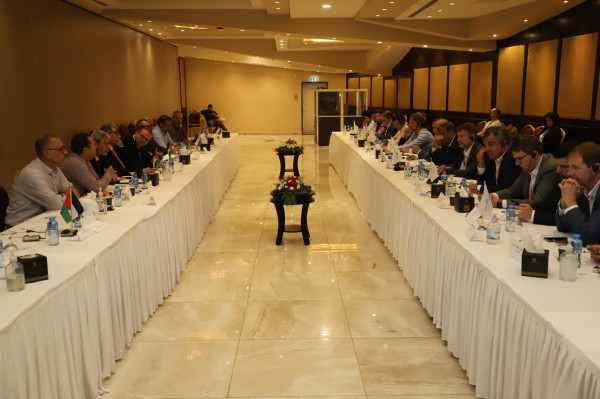